Ever since slots first appeared in saloons in the early 1900s, there have been plenty of myths and misconceptions regarding these immensely popular games of chance.

The early slots were quite simplistic — with only three reels and a handful of different symbols on each reel. Gamblers would watch as the symbols changed until the machine came to a halt. If you matched three symbols, you would win.

Consequently, nobody doubted the legitimacy of physical slot machines. However, that didn’t stop superstitious gamblers from coming up with bonkers theories. The most common false belief, known as the “gambler’s fallacy,” is that the machine has to pay after taking in a certain amount of money.

Sadly, slots don’t function like piggy banks. They won’t start overflowing if you put enough coins into the machine nor will the amount of money within the machine impact the probability of getting a winning combination in any way.

The stories are even more vivid when it comes to online slots. They have all the elements of physical slot machines, plus they exist in a virtual setting, which used to be a complete mystery to most gamblers when online casinos first started appearing.

If you’re an avid gambler, you’ve probably heard this sentence a million times. Hell, you’ve likely said it yourself out of frustration, or at the very least had this exact thought. 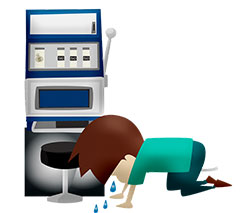 And that’s perfectly understandable. I’ve had countless sessions where it felt that the slot was “eating my money.” Then again, I’ve hit quite a few decent wins at times. And we all know someone or at least someone who knows someone who has hit that million-dollar jackpot.

So what’s the deal with online slots? Just think about it logically for a second. If the slots never paid out, nobody would play them. On the other hand, if they paid out too often, the casino would be at a loss. It’s just that they pay out slightly less than they take.

This is no coincidence, mind you. Video slots are programmed in that way. But how exactly do they work, how are they programmed, and what does that mean for us — the players? Well, to give you a satisfactory answer to these questions, I must first explain what RNG is. Then, you’ll also see how the algorithm behind these games of chance works and how the slot “determines” how much you’ll win.

At their core, slots are little more than random number generators in a fancy suit. The only difference is that, rather than a string of numbers, you see visually appealing symbols on your screen.

Once, the symbols were quite basic — cherries, bells, bars, sevens. Nowadays, as the computer industry continues to evolve, slots feature stunning visuals and breathtaking animations. But behind the facade, at the very core of every slot game, is a simple random number generator.

What is this “mysterious” thing that determines whether you’ll leave the casino broke or with a bulging wallet?

Put simply — the random number generator is a mathematical algorithm. Its function is to pull a random number from a predesigned database whenever a player hits the “Spin” button. Each of these numbers corresponds to a specific combination of symbols on the reels.

So although you may feel like the slot “isn’t letting” you win, you’re merely not lucky enough to pull the right (lucrative) string of numbers with your wagers. It’s not because the slot is “rigged” or anything. Any slot player with the slightest idea of how programming works will tell you that the casino can’t simply change a single line of code as you’re playing to guarantee that you’ll lose. The entire setup is a lot more complicated than that.

Let’s take a look at a specific example, so you’ll better understand exactly how online slot machines are created.

To keep things as simple as possible, we’ll use a basic three-reel slot with five different symbols as our project. Naturally, this explanation will be oversimplified, but our goal is to illustrate the core concept in a simple, easy-to-understand manner.

All other slots function on the exact same principle; they just have a few extra steps on top, such as wilds, scatters, bonus rounds, floating symbols, collapsing symbols, etc.

Back to the issue at hand — our three-reel slot with 5 different symbols. Let’s say there’s only one winning combination — three sevens. Since there are 3 reels and 5 symbols, that’s a total of 243 different combinations. Only one of them will result in a win. Since the chances are 1:243, we have to make the three sevens quite lucrative. Say the payout for this combination is $237.

So why would anyone choose to play slots when they’re almost guaranteed to lose? Well, the house (casino) needs to have an edge to be profitable. Moreover, RTP is theoretical and is calculated on millions upon millions of spins.

In reality, you might not win a dime off of a hundred spins. Similarly, you might hit the winning combo in just a handful of spins and walk out of the casino 200 times richer. This randomness and the promise of hefty rewards is what gives us that adrenaline rush and keeps us coming back for more.

What I’ve talked about here are just the bare bones of slot machine games. Modern three-reel slots are much more complex, not to mention the popular five-reel video slots. Each added reel, symbol, feature, payline, and winning combination further complicates the mathematics, programming, and engineering of the particular slot.

Taking all that into consideration, you can only imagine how much time and effort is necessary to program a contemporary slot. On top of that, the software developers have to write separate codes for bonus games, progressive jackpots, winning combinations with wilds, etc.

So believe me, it’s highly unlikely they’re going to go through the trouble of changing the code retroactively to lower the game’s RTP. Keep in mind that a single semicolon in the wrong line of code could cause the entire game to stop working. Once they write the initial algorithm that pulls the random combinations, the best way to adjust the RTP would be to change the paylines and/or the slot machine payouts.

Still, you needn’t worry about that too much either. Online slots typically have rather high RTPs, mainly due to the vast amount of competition. There are thousands of online casinos out there; it’s only logical that you would opt for the one that gives you the highest chance of winning.

Besides, the payback percentage (RTP) is determined by the software developer, not an individual casino. So for instance, every online casino featuring the Mega Joker game gives players a chance to wager real money on a game with a 99% return to player.

What Can You Do to Win More?

The only thing you can do is go for “loose” slots — the ones with the highest RTP. Some casinos publish the RTP of each of their games, but these are few and far between. Still, a simple Google search will help you find this information (again, because the software developer determines the RTP when creating the game).

In some instances, although very rarely, the devs allow casino operators to tamper with the paylines and payouts of their games. This is a cardinal sin in the online gambling world, and you should avoid such casinos at all costs.

Aside from carefully choosing where and which slot to play, there’s little you can do. Increasing and lowering bets, wearing red underwear, placing a Maneki-neko on your desk, and other superstitions are just that — superstitions.

You simply need to get lucky to win; there’s not much more to it. If you believe you can effectively boost your luck, then go right ahead. The bottom line is that slot machines aren’t sentient, nor is there a little leprechaun inside the slot, who happens to dislike you and deliberately stops the reels on losing combinations.

Likewise, the casino can’t remotely control which symbols appear and when the machine stops spinning. It all boils down to the Random Number Generator. Once you make peace with the word random in the RNG and start playing for fun, rather than expecting to win astronomical amounts of money, all your play sessions will be much more enjoyable.